Snapchat or TikTok: How to reach the Generation Z?

Generation Z includes teenagers and young adults born around the turn of the year. They are tech-savvy, digitally connected and grew up with online media, which is why they are also called digital natives. But which social channels does Gen Z use particularly frequently? Snapchat or TikTok? We give you an overview of how you can reach Generation Z with organic and paid content on Snapchat or TikTok.

Many marketers today face a new challenge: How do we reach Generation Z? By comparison, Facebook is an ideal foundation for reaching Generation X (birth years 1960-1979) and Baby Boomers (born before 1960) online. It gets trickier with Generation Y or Millennials (1980-1996), where a majority spend time on Instagram. Generation Z (1997-present) is setting new standards in the difficulty of online marketing. Instead of Facebook and Instagram, Generation Z has other communication channels: Snapchat or TikTok.

Generation Z may not yet be among the high-income target groups – but this generation, too, will one day start working, earning money and, of course, spending it. However, the hope of many marketers that the working people of the respective generation will then register on Facebook and can thus be reached via Facebook Ads is considered rather unfounded. Most of Generation Z have already explored the world of the Internet via cell phone or tablet as children. Statistics show that Generation Z is mobile first, which means they prefer the mobile version of apps or websites. Apps with a focus on photo and video content, such as Snapchat or TikTok, are the favorites among Gen Z.

So new advertising opportunities on platforms such as Snapchat or TikTok are needed, where the younger generation can also be reached. Already today, companies like GUESS or BMW rely on advertising in the young social media and hope to strengthen their brand awareness.

Snapchat or TikTok: Which social media platforms does Generation Z use?

We give you an overview of the benefits of Snapchat or TikTok:

Snapchat – a friend network as a marketing platform?

Snapchat is a mobile application for Android and iOS devices. In layman’s terms, users often refer to the app as Snap. One of the core concepts of the app is that any picture, video, or message sent by users (also referred to as a Snap) is only available for a short period of time by default before the recipient becomes inaccessible. This temporary or ephemeral nature of the app was originally intended to encourage a natural flow of interaction.

In terms of audience, the app scores well: According to statistics, Snapchat boasts 332 million users and over 5 billion snaps recorded daily, and the app is also opened an average of 10 times per user each day in germany. 60 percent of users are female and 75 percent of users are under 35 – so it’s a remarkable platform if you have a young target audience. And one statistic in particular stands out: 38 percent of Snapchat users don’t use Facebook or Instagram and can’t be reached via the two major social media platforms.

When Snapchat launched in 2011, teens and young adults took to the app. Snapchat allows its users to send video- and photo-based stories to friends, which can be modified beforehand using various filters such as the dog filter with fluffy ears or other editing options. It is striking that the content expires either immediately after viewing or after 24 hours at the latest – which means that explicit, adult content is also increasingly sent.

So, in order to not only reach potential customers via typical Facebook Ads, Snapchat also offers its own advertising. Advanced audience targeting, simple and more complex campaign setup, and different ad formats are just a few items that can be found in the Snapchat Business Manager.

The “Discover” page is particularly interesting for businesses: Companies can place ads in video or photo format. Here, in contrast to the rest of the app, you can also find many high-quality produced videos. But collection ads, story ads or even filter and AR ads are also possible here. 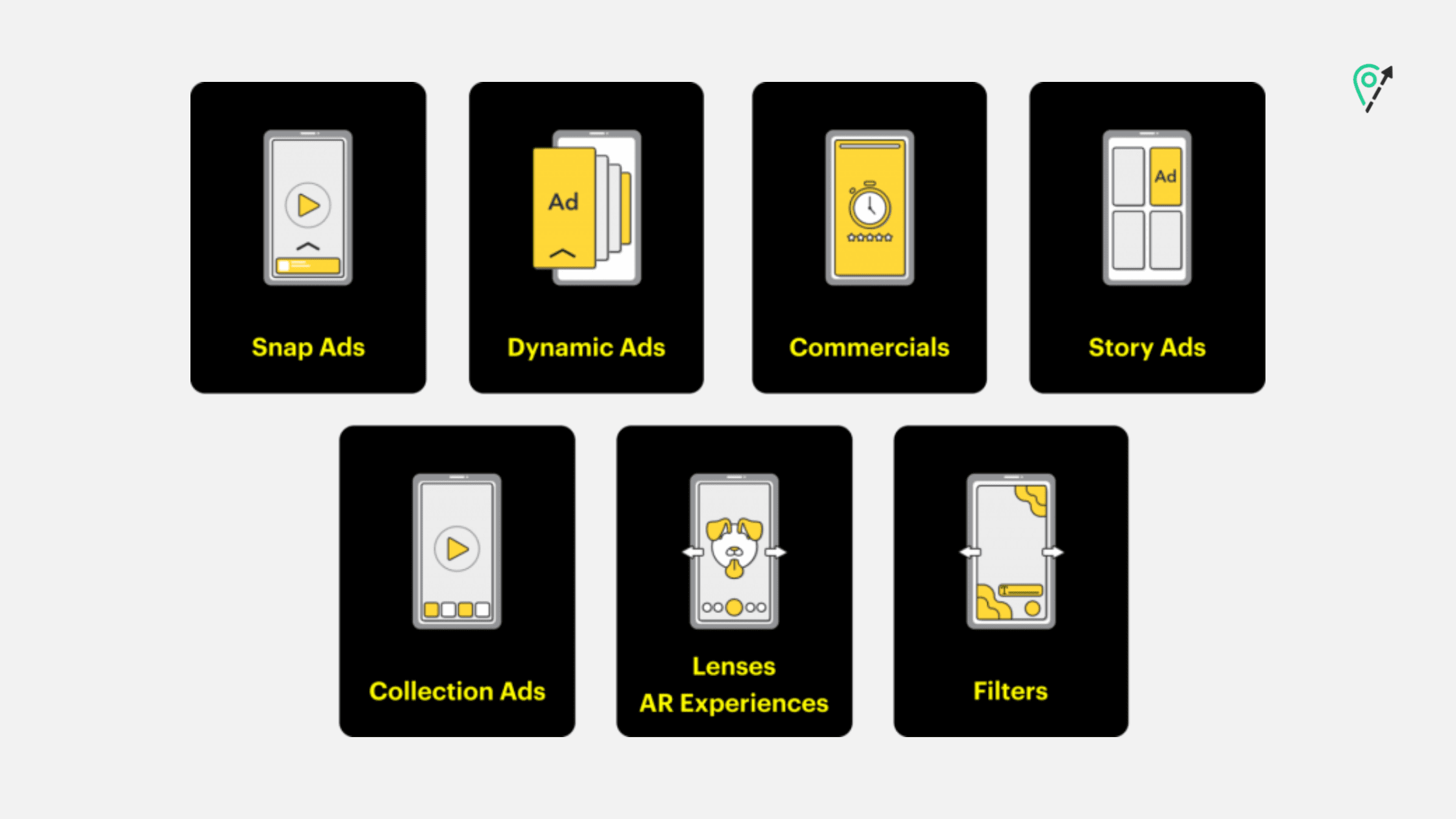 TikTok is a popular social media app with over 1 billion users worldwide. It was only launched in 2017 by Chinese company ByteDance and has already been downloaded 25.7 million times from the Google Play Store – overtaking social media giants Facebook and Instagram. In China, TikTok is called “Douyin” and is nowadays a separate app for the huge Chinese audience.

With TikTok, users can create, watch and share short videos taken with their cell phones. With its personalized, whimsical video content accompanied by music and sound effects, the app stands out for its high engagement. The big difference with Snapchat is that users don’t have to connect with other users to see content.

Learn more about the potential and opportunities of TikTok and how you can use the platform for your business.

TikTok allows its users to record 10- to 60-second videos. But unlike other platforms, it features a lot of dancing, singing and comedy skits. Lip-sync videos of popular songs or movie clips are also popular. TikTokers can add effects such as filters, background music and stickers to their videos. Even if they are in different locations, you can collaborate on content and create split-screen duet videos.

After opening the app, users are taken directly to the “For You” page, where videos are suggested based on data like age, region, and previously watched videos. Swiping up and down takes the user directly to the previous or next video, respectively. The special feature: The user does not have to actively start the videos, because they are automatically played as a loop. As a result, the average TikTok user spends on average 50 minutes a day in the app – a considerable period of time. If we compare this figure with television (220 minutes), we can see that the popularity of TikTok has not only grown rapidly, but also offers great potential for advertisers.

TikTok advertising is becoming more and more important for marketers due to its high popularity. There are different advertising options on TikTok: Brand Takeover, Top View, In-Feed Ads, Branded Hashtag Challenge, Spark Ads (Branded Effect). Advertising is fed into the normal feed on TikTok and is only indicated by a small “Sponsored” in one corner. Again, native content works best: a company can’t go wrong with humorous videos. 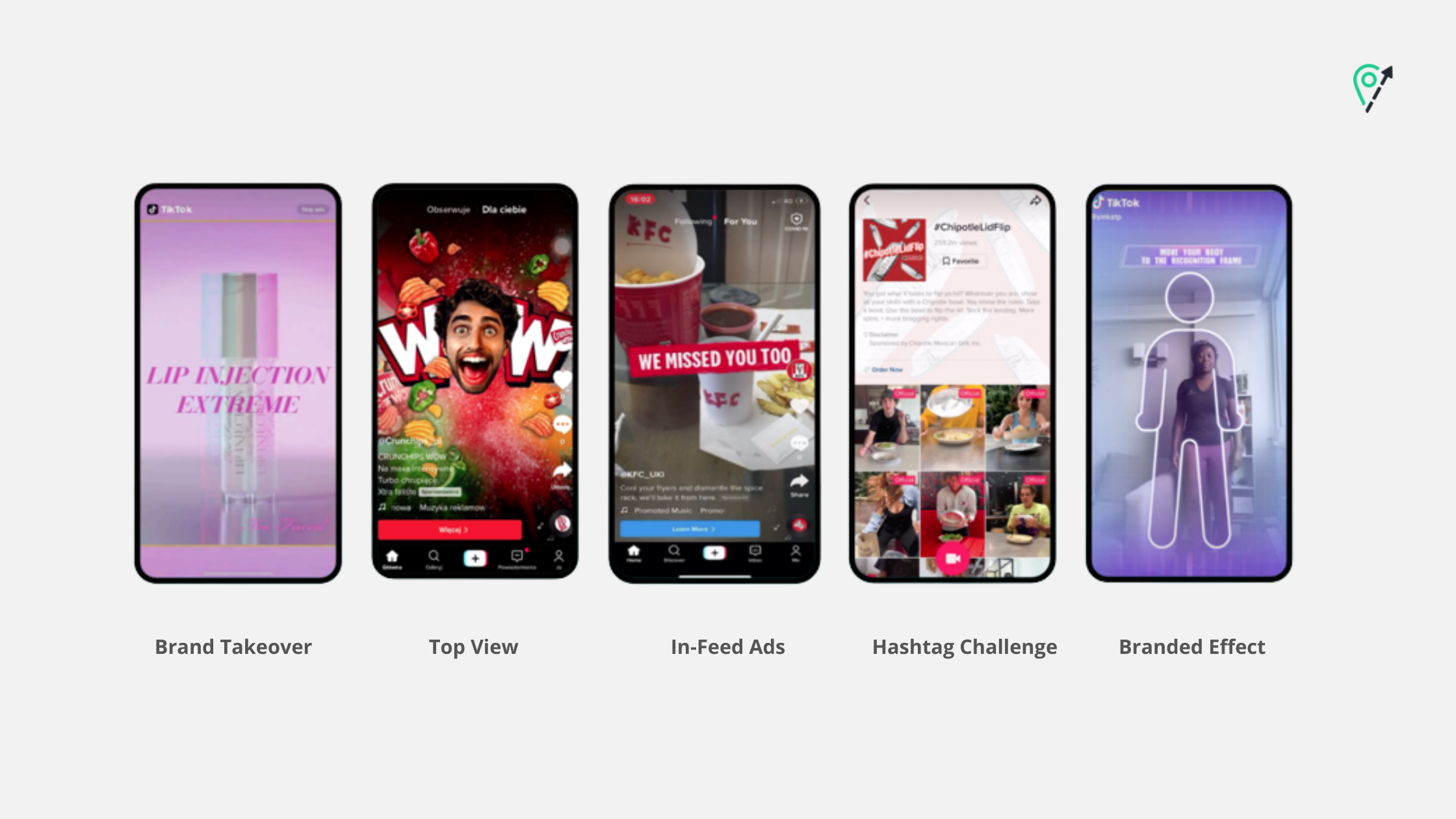 Snapchat or TikTok: Which platform should you choose?

In conclusion, the decision between Snapchat or TikTok depends only on your target audience and willingness to experiment. Snapchat has shown itself to be more stable than TikTok due to its longer existence. But the growth giant should not be neglected: There is still an opportunity for companies to achieve brand loyalty among the young target group with the right content – at least as long as most other companies still have their focus on Facebook and Instagram. So take advantage of this opportunity!